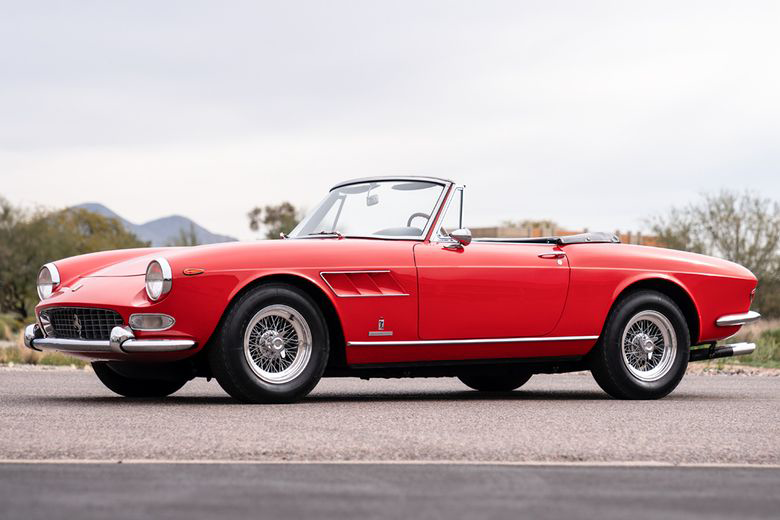 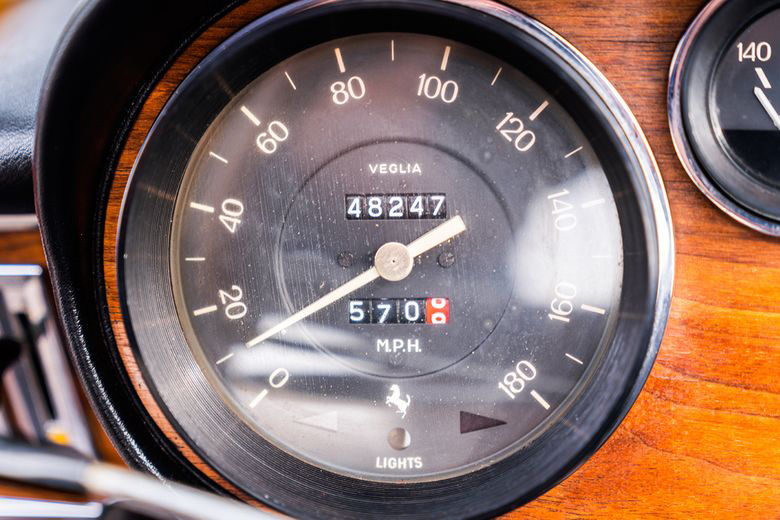 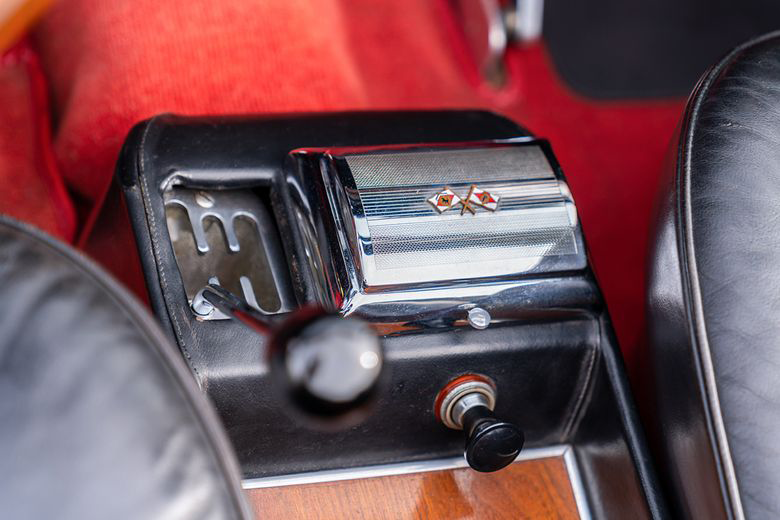 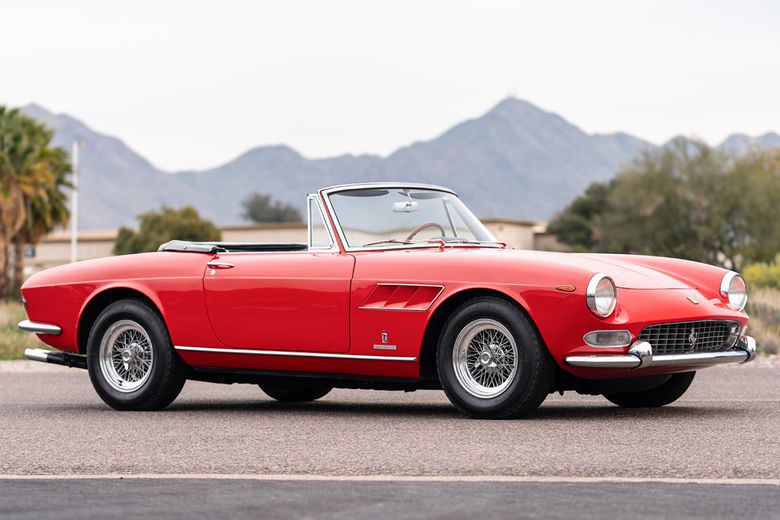 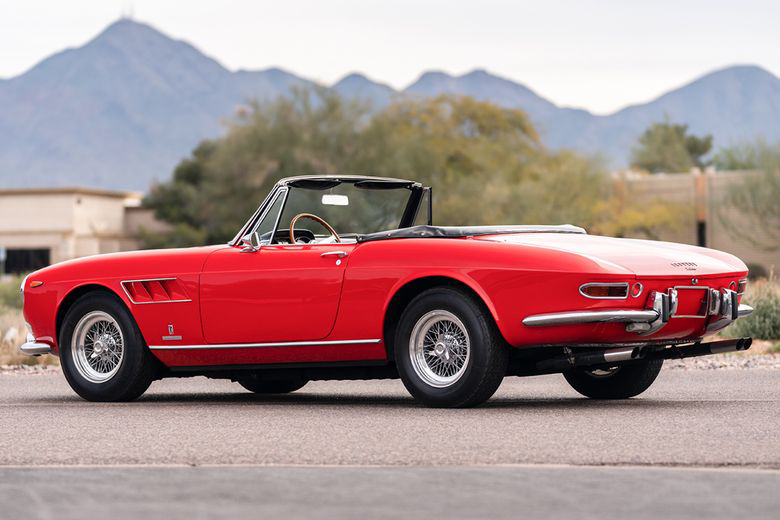 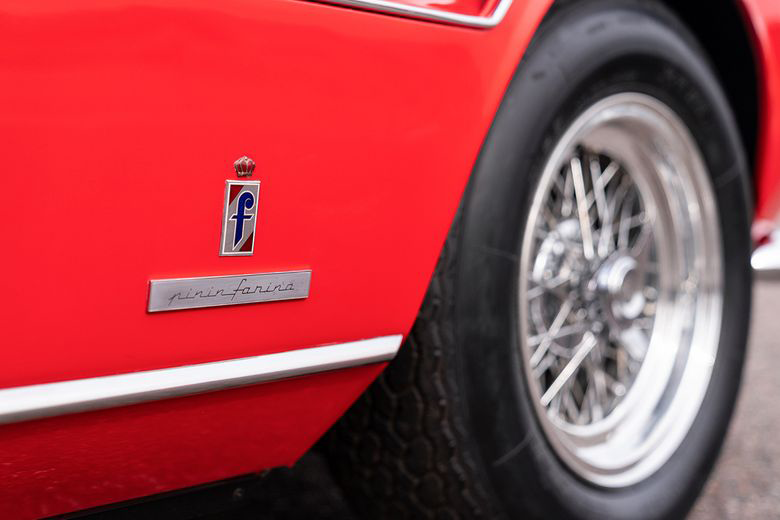 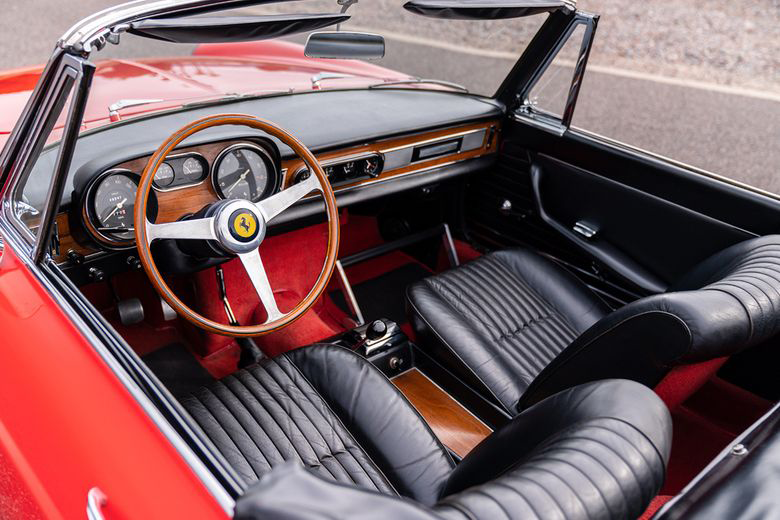 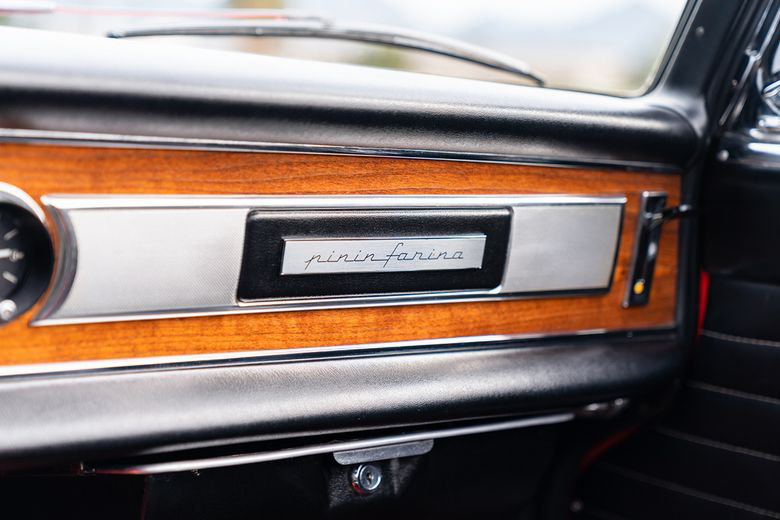 Completed at the Ferrari factory in January 1965

Displayed on the Ferrari stand at the 1965 Brussels Motor Show

Number four of only 200 units made

Debuting together at the Paris auto salon in October 1964, Ferrari’s handsome new 275 GTS and 275 GTB succeeded the outgoing 250 series in one stroke. Technically, they marked a major leap forward as the first-ever Ferrari road cars equipped with a fully independent suspension and a rear-mounted five-speed trans axle. Both the GTB and GTS were powered by the new tipo 213 engine – a 3.3-liter variant of the traditional Colombo-designed single overhead cam V12.

As the direct replacement for the popular 250 GT Series II Cabriolet, the 275 GTS featured a clean and crisply tailored Pinin farina body, built to the coach builder’s famously high standards. While it primarily was intended as a fast and stylish open touring car, the 275 GTS was a beautifully balanced and formidable sports car – capable of accelerating from rest to 60 mph in as little as 6.6 seconds, with atop speed in excess of 225 km/h.

In all, just 200 examples were built during a two-year production run, with the majority delivered to the US. When new, these glamorous open Ferraris attracted a distinguished clientele – a veritable “who’s who”of the entertainment and social scenes, including celebrities like Eric Clapton and Jayne Mansfield.

This 275 GTS was completed at the Ferrari factory in January 1965, finished in the classic color combination of Rosso Cina (China Red) with black leather upholstery and contrasting red carpeting. Among the first examples built, this 275 GTS was assigned assembly sequence no. 4 with corresponding Pinin farina body no. 175004.

Several early production 275 GTS models were retained for promotional duties and were exhibited at leading international motor shows. Chassis 06315 debuted at the Paris Auto Show, while 06417, a right-hand-drive model, was featured at the Earls Court Motor Show in London. The car presented here was displayed on the official Ferrari stand at the 44th annual Brussels Motor Show, where it was shown alongside a 275 GTB, chassis 06643. These details are confirmed by a factory delivery note addressed to Belgian Ferrari dealer Jacques Swaters Garage Francorchamps, a copy of which is on file.

According to Ferrari historian Marcel Massini, 06805 returned to Maranello after its official show duties, where it was prepared for delivery to LuigiChinetti Motors in New York. Upon its arrival in the US, the Ferrari was sold to its first private owner, Donald Andrews of Fort Lauderdale, Florida. A well-known enthusiast, Mr. Andrews owned a number of significant Ferrari models, opened the Miami dealership Waldron Motors, and, as a longstanding FCA member, established the prestigious Coppa Bella Macchina award.

Mr. Andrews kep this 275 GTS until 1969, when he sold it to J. Peter Martin, a Southern Gulf Utilities executive residing in Coral Gables, Florida.Over the next 15 years, Mr. Martin enjoyed the Ferrari on road trips,in FCA events, and during occasional track outings at Moroso, Sebring, and Daytona. During his ownership, 06805 was illustrated in the pages of Cavallino magazine, accompanying Dyke Ridgley’s “275GTS” article and chassis listing.

In 1984, Mr.Martin consigned the 275 GTS with Shelton Ferrari, and it was soon sold to Ronald Martin, also of Florida but of no relation. He kept the car until 2001, when it was sold, via Ed Waterman, to a Japanesecollector.

After a few years, 06805 returned to the US and formed part of an extensive Maryland-based collection, before being acquired by the current owner.

The Ferrari has benefited from sparing use in recent years, and today it shows less than 48,500 miles on the odometer, a figure the consignor believes represents the original mileage. Retaining its matching-numbers engine (no. 06805, internal no. 116/64) and presented in its attractive factory colour scheme, the 275 GTS is in impressive condition throughout and accompanied by a history report by Marcel Massini.

Among the most rare and exclusive road cars of the 1960s, the 275 GTS remains a highly sought-after collectible. These Ferraris are remarkably versatile, offering a rare blend of style, comfort, performance, and ease of use, while being eligible for countless rallies, club events,and leading international concours.

Given its status as the 1965 Brussels show car, well-documented provenance, and authentic character, this is a unique and noteworthy example of the 275 GTS. Never before presented at public auction and kept in the hands of collectors since it was virtually a new car, 06805 is a significant Ferrari – one worthy of serious consideration.