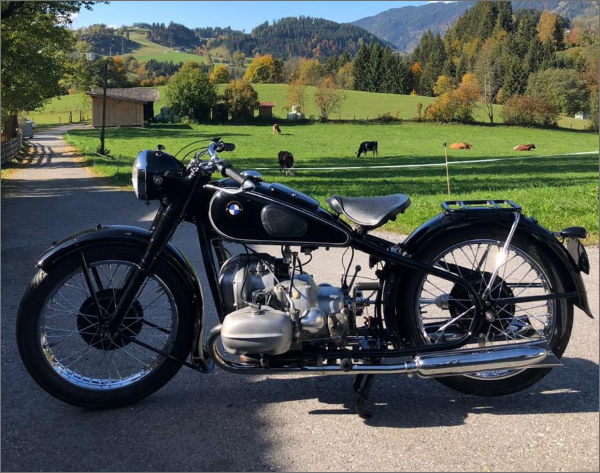 In the spring of 1936, BMW presented an entirely new motorcycle at the German Car and Motorcycle Exhibition, the R5. This 500-cc sports model's appearance resembled the factory-entered racing bike that had aroused such interest in 1935. The massive pressed steel frame gave way to a structure based on electrically welded oval tubes. This light weight frame together with the revolutionary telescopic fork provided excellent ride properties even though rear suspension had not yet been developed.

New features consist the newly designed engine with two chain-driven camshafts operating the valve gear, the possibility to operate the gearbox by the left foot, the foot brake (by the front of the foot, no longer by the heel) and the tool compartment integrated in the fuel tank.

In 1937, a small batch of competition motorcycles based on the R 5 was manufactured for a few selected riders. The R 5 SS (Super Sport) developed about 4 hp more than the series-production version and reached a top speed of 160 km/h. This was well below the output of the supercharged works motorcycles, but for the next generation of riders it none the less represented a good starter model for the world of motorcycle racing.